And the spills just keep on coming, PIA signs on to demands for answers to the Zama city Apache spill 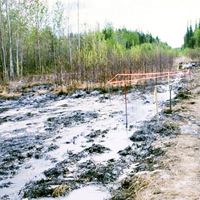 A few weeks ago there was the Apache spill near Zama city and the Dene Tha’ First Nation in northeastern Alberta. We still don’t know exactly when that spill occurred, let alone the content of the spill or its impacts on the environment. The government of Alberta has been silent on all of these fronts. In fact, the government did not notify the public of the spill until 11 days after Apache reported the spill.Troubled by the Province of Alberta’s silence regarding the incident, Ecojustice has submitted another letter on behalf of 9 organizations (including Public Interest Alberta), this time requesting further information on the spill and an explanation as to why it took so long for the government to inform the public and the Dene Tha’ of the incident. We have requested a response by Aug. 1.It looks like more letters will be necessary as we have learned of three new spills in the last few days: a Legacy spill near Turner Valley, an Enbridge spill near Anzac, and a Pennwest Exploration spill near Little Buffalo. It is likely just a matter of time before the next spill is reported.Meanwhile, as all these spills are occurring, debate has raged on about major energy projects that require regulatory approval to go ahead — including mega-pipelines like the controversial Enbridge Northern Gateway and Kinder Morgan’s Trans Mountain expansion project. At review hearings for Northern Gateway, which wrapped up earlier this week, Enbridge tried to assure Canadians that thanks to improved safety measures, we need not worry about pipeline leaks and spills. Respectfully, we disagree. You just need to look around to know that pipelines pose very real risks despite the assurances being given by companies like Enbridge.Canadians need to ask whether it makes sense to push forward with these new pipelines projects, given the effectiveness (or lack thereof) of current safety measures. Something needs to change or we’ll just continue to see more of the same: potentially toxic oil spills that endanger our environment and health, and a lack of public transparency and accountability.When will we stand up and say “enough is enough”?Read in full at the ecojustice website.