EDMONTON - Today, Alberta researcher and advocate Dr. Euan Thomson, Public Interest Alberta and Friends of Medicare presented data and called on the UCP government to retract its claims that drug poisoning or overdose deaths are significantly decreasing as a result of their policies. The analysis shows that overdose announcements being made while medical examiner backlogs continue have artificially dampened mortality numbers, calling into question the provincial government’s entire shift in strategy toward an abstinence-only focus.

“Every one of these numbers is a real person with a family history and a story, and my heart goes out to everyone impacted by this crisis and the government’s misleading and callous approach to it,” said Thomson. “Not only is the mortality data released by the province chronically late, but it is also false – I fear the worst is yet to come unless we allow more options for people who use drugs.”

“The UCP approach is failing Albertans and people are dying because of it,” said Bradley Lafortune, Executive Director of Public Interest Alberta. “We can’t afford to follow this dangerous experiment any longer. We need evidence-based, data driven, and compassionate strategies to ensure lives are saved and people are supported.”

“Now that we know these numbers were far worse than the province first presented, it’s time for the government to abandon its failing abstinence-only approach,” said Chris Gallaway, Executive Director of Friends of Medicare. “We need a public health based approach that includes things such as safe supply, supervised consumption services, and other evidence-based harm reduction strategies.”

Thomson’s research shows that monthly overdose mortality announcements by the UCP government dangerously and grossly undercount the true tally. According to records kept through 2022, provincial mortality data was quietly updated in the months following their initial, self-congratulatory announcements, which seemed to show large decreases in mortality. However, between March 2022 and August 2022, the increase from the initial to the updated mortality counts averaged nearly 30% and reached as high as 55%. 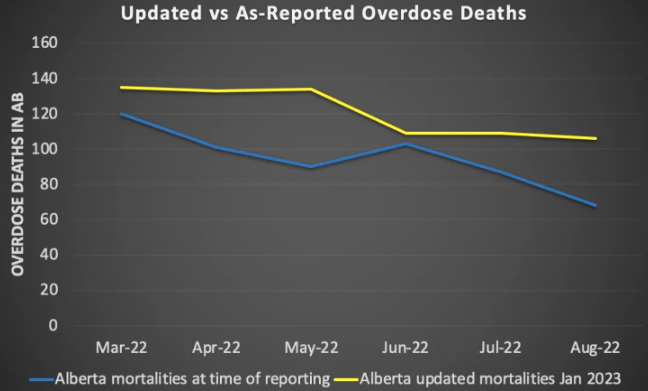 In addition, accidental overdose or poisoning events at Safeworks, Calgary’s supervised consumption site are closely linked to total overdose mortalities in Alberta, providing a measure of drug supply toxicity as well as a mortality forecasting tool while medical examiners relieve the backlog. Accidental overdoses at Safeworks have risen in recent months from 2.75 to 5.9 of every 100 visits to the site in December 2022. This approaches the highest level on record of 7.9%, seen in December 2021. This projection positions December 2022 with the sixth-highest overdose mortality toll on record for Alberta. 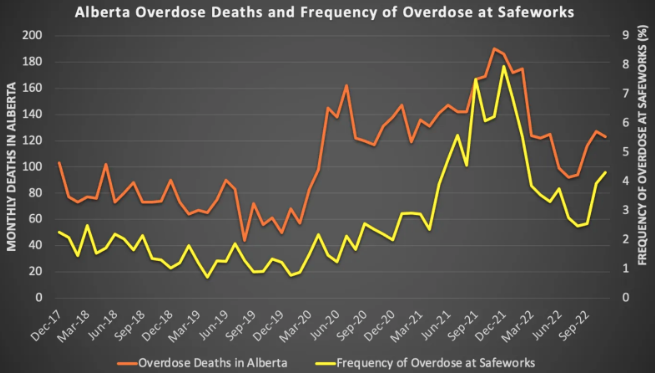 “Media covering these overdose mortality announcements would be justified in applying a 30% upward correction factor for future announcements, which will account for the deaths later revealed by the backlogged medical examiners,” said Thomson. “With 3,362 deaths in 2021 attributed to ‘Unknown Cause’ as a result of this medical examiner backlog, 2022 is sure to be remembered as a similarly devastating year for failed drug policy in Alberta.”

“We need an entirely new approach that leaves behind the UCP government’s current failed strategy,” said Lafortune. “With the provincial government having positioned itself against regulated drug supply measures, there is little hope currently for the replacement of the illegal market with regulated alternatives. However, any policy measure falling short of regulating the drug supply or providing safe space to use drugs at this moment will do little to mitigate the effects of the toxic supply.”

Dr. Euan Thomson, Public Interest Alberta and Friends of Medicare demand that the Government of Alberta to revise its earlier claims to reflect the updated data, take immediate measures to reduce the thousands of deaths currently awaiting medical examiner certification, and broaden the Alberta drug strategy to include rapid expansion of overdose prevention sites and regulated supply access for people who use drugs.