Post-Secondary Education is the Answer

Post-Secondary Education is the answer to building a highly-skilled, prosperous, and vibrant society. When we ask how we can solve most of the issues facing Alberta today, one of the most important answers is increasing investment in PSE.

“Post-Secondary Education is the Answer” is a campaign coordinated by Public Interest Alberta in partnership with undergraduate students, graduate students, staff unions, and faculty associations from across the province to mobilize the public to speak out for greater investments in post-seconary education (PSE). The campaign was launched on February 27, 2015. The campaign includes:

How do we improve our health and education systems?

Alberta’s population is growing and many baby boomers are set to retire over the next ten years. The expected shortage in healthcare professionals will seriously impact our healthcare system unless we invest now in expanding and improving the quality of post-secondary program system. Similarly, we need to expand the number of early childhood educators, K – grade 12 teachers and assistants. Alberta also needs a strategy to attract and retain top faculty and graduate students to our institutions.

How do we diversify and strengthen our economy?

How can we address social issues like reducing poverty and building inclusive communities?

How can we resolve the serious environmental issues facing Alberta and the planet?

Research being done at many of Alberta’s post-secondary institutions is looking at solutions to environmental issues from reclamation of tailing ponds to developing better solar and wind energy systems. Trades people are learning about how to build net zero energy houses, and engineering students are designing electric cars. Investment in post-secondary education could support the basic science, new innovations and skilled trade people we need to shift Alberta to a green sustainable economy.

How do we develop more vibrant culture and communities?

Post-Secondary Education supports people to develop the creative talents and skills that make our communities vibrant fun places to live. Writers, musicians, filmmakers, craft people help us understand and celebrate who we are and play an important role in our economy. Our post-secondary institutions also play a vital role in connecting people from communities around the world and helping newcomers become a vital part of the Canadian mosaic.

Public Interest Alberta's Post-Secondary Education Task Force hosted meetings in five major cities to reach out to partner organizations and concerned citizens to get involved in advocating for increased government investments in post-secondary education. Post-Secondary Education is the answer to building a highly-skilled, prosperous, and vibrant society. When we ask how we can solve most of the issues facing Alberta today, investing in post-secondary education is one of the most important things we should be doing.

Media coverage of the meetings can be found in the media section.

The following 2-minute animated video was released when the "Post-Secondary Education is the Answer" campaign was launched on February 27, 2015.

Media coverage of the campaign:

In this section you will find resources that are useful when advocating for increased government investment in post-secondary education (PSE). Additional information and resources will be added to this page as the campaign progresses.

Cost of post-secondary has increased 267% since 1991 - the second highest increase in the country (SOURCE: Stats Can –CAUT Almanac – 3.3).

Since 2007, Alberta’s Tuition policy only allows annual increases in line with annual inflation rate. While this means that Alberta’s tuitions compares with most other provinces, institutions have gotten around the tuition policy by increasing tuition for specific programs (market modifiers) and allowing institutions to dramatically increase non-instructional fees with no justification.

On average non-instructional mandatory fees are $821. In 2014/2015, additional compulsory fees for undergraduate students ranged from $226 in Newfoundland and Labrador to $1,069 in Alberta. The same two provinces also posted the lowest and the highest additional compulsory fees for graduate students, with students paying $279 in Newfoundland and Labrador and $1,333 in Alberta (SOURCE).

Alberta has the lowest PSE participation rate in Canada. In 2013, only 18% of people in Alberta 18 – 34 years old had participated in post-secondary education, compared to the national average of 24%. To increase the number of students to the national average, Alberta would have to increase the number of full load equivalents from 160,000 to 213,000.

Rural, aboriginal and low-income students less likely to attend PSE. About one-quarter (22.3%) of Aboriginal Albertans living off-reserve have less than high school diploma as their highest level of education, more than twice the rate of non-Aboriginal Albertans. The proportion of those who have post-secondary qualifications, especially university degrees is lower among Aboriginal Albertans (48.4% vs. 62.8%). 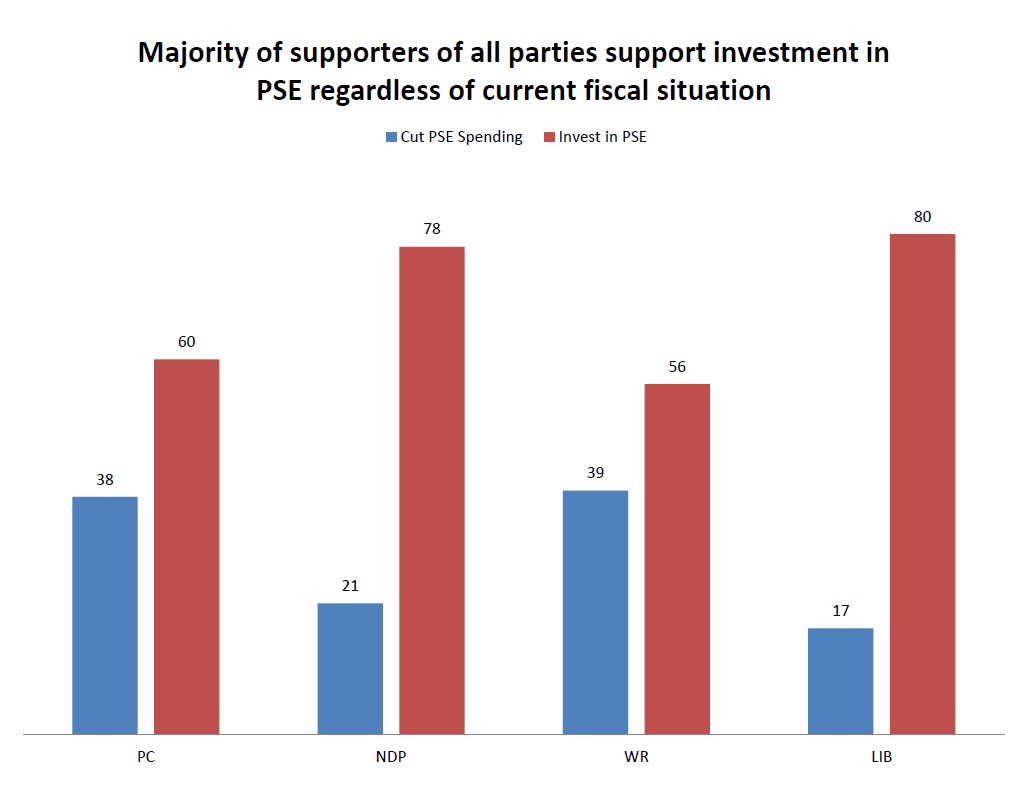 Environics Research Group conducted a poll in February 2015 that shows a very strong majority of Albertans (from 76% to 90% depending upon the issue) agree that investing in post-secondary education (PSE) helps resolve many key challenges facing Alberta. The poll also shows that right across the political spectrum, a majority of Albertans (67%) want greater investment in post-secondary education regardless of its current budget challenges, and only 30% would support cuts to PSE.

The following organizations are partners in the campaign: