From Poverty to Progress 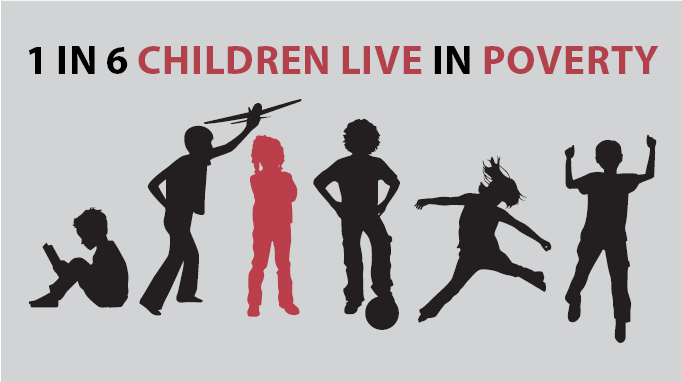 Nearly 150,000 children in Alberta – that’s one out of every six kids – currently live in poverty. Poverty is prevalent across the province, but vulnerable groups such as single parents, minimum wage earners, and racialized communities are more susceptible. The result is generation after generation of people who lack access to early education, health care supports, adequate housing, and proper nutrition. 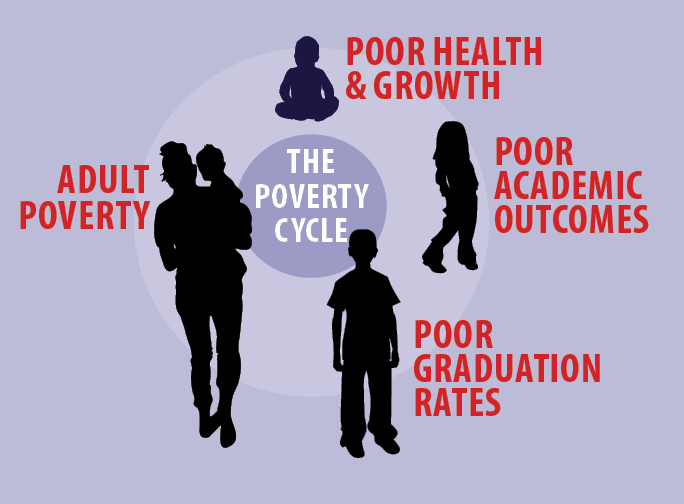 Poverty can impede children’s ability to learn and contribute to social, emotional, and behavioral problems, which continues into teens and adulthood. 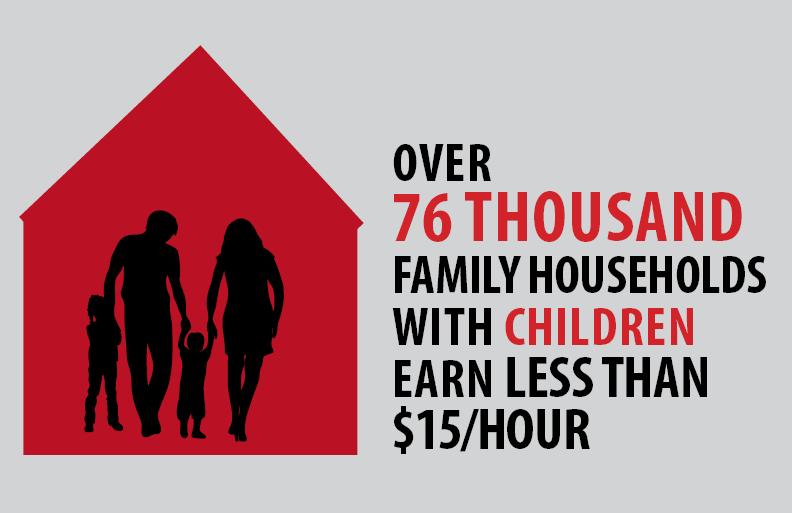 Risks are greatest for children who experience poverty when they are young and/or experience deep and persistent poverty. 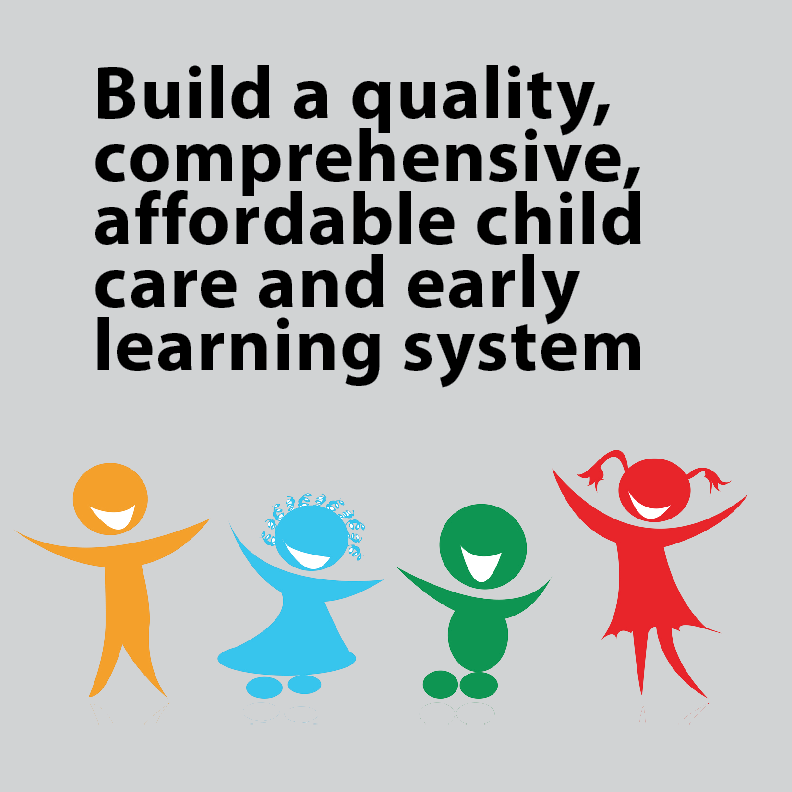 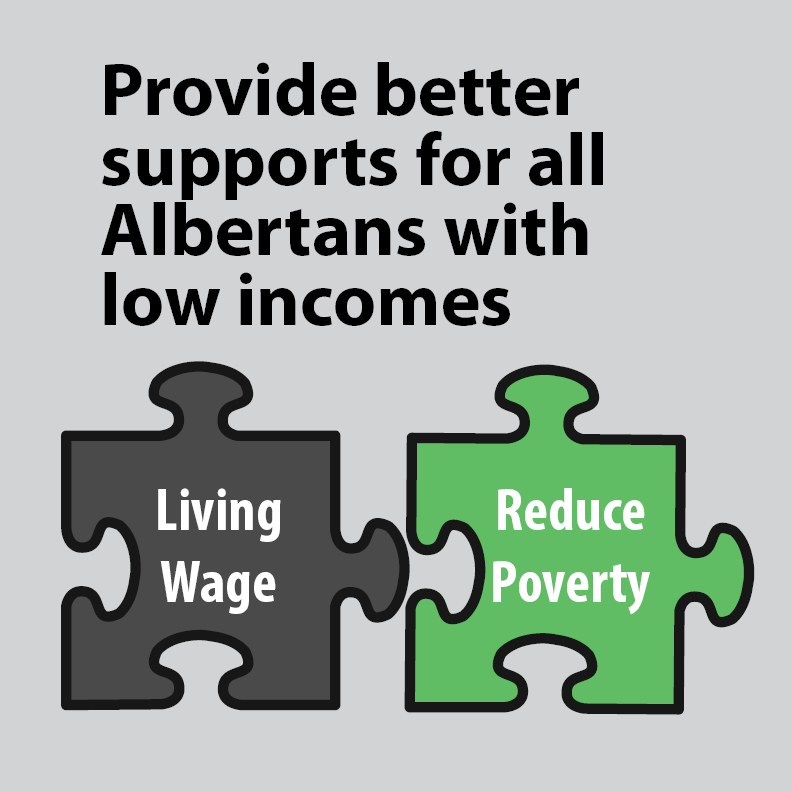 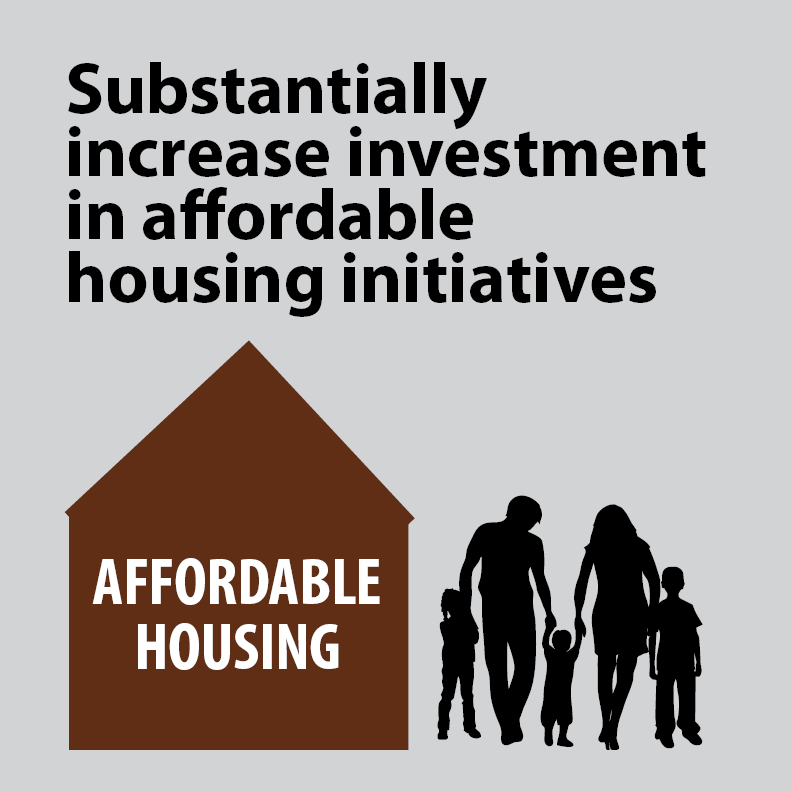 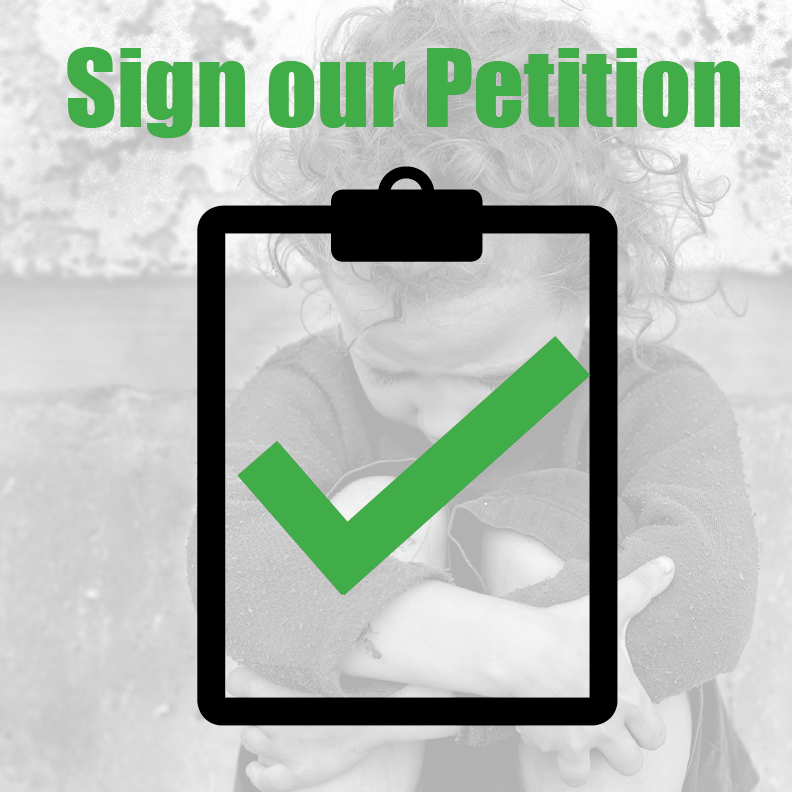 From Poverty to Progress is a step towards ending the cycle of child poverty.

The campaign was launched on August 16, 2017 and includes:

The NDP government has made some significant positive steps to alleviate poverty:

Despite these actions, Alberta’s women and children are still affected the most by income disparity. Children are overrepresented among Alberta’s poor; they represent 22 percent of the population but comprise 30 percent of all people living in poverty.  Many families continue to struggle to afford quality, and accessible child care. Women are disproportionately affected by the lack of access to child care because it hinders their ability to fully participate in the economy, while children in poverty do not have access to quality care and early interventions.

Alberta needs a poverty-reduction strategy to prevent, reduce, and ultimately eliminate poverty in Alberta. This strategy should align with the local poverty reduction initiatives that are happening in municipalities across the province in order to effectively meet community needs.

The strategy needs to include good jobs at living wages that ensure full-time work is a way out of poverty; an effective child benefit that is indexed; a system of affordable accessible early learning and child care services available to all families; a program to create more affordable housing and to help maintain existing properties; an affordable and accessible post-secondary education system, and training programs that prepare youth and adults for employment leading to economic independence.

Public Interest Alberta obtained the following low-wage earner statistics from Statistics Canada's monthly Labour Force Survey. They indicate the average number of employed Albertans in each category for the year ending June 30, 2017. The minimum wage will increase from $12.20 per hour to $13.60 per hour on October 1, 2017.

Nearly one in five employed Albertans are low-wage workers.

The majority of low-wage workers in Alberta are women.

More than three-quarters of low-wage workers are 20 years of age or older.

Read our media release showing what the data means for Albertans working in the province.

Learn about the issues, engaging your candidates, and informing yourself and your community before heading to the ballot box on October 16!

Together, we can make Alberta’s municipalities more fair, just, and progressive.

PRIORITIES AND QUESTIONS FOR CANDIDATES

For Municipal and School Board and Municipal Candidates

For School Board Candidates 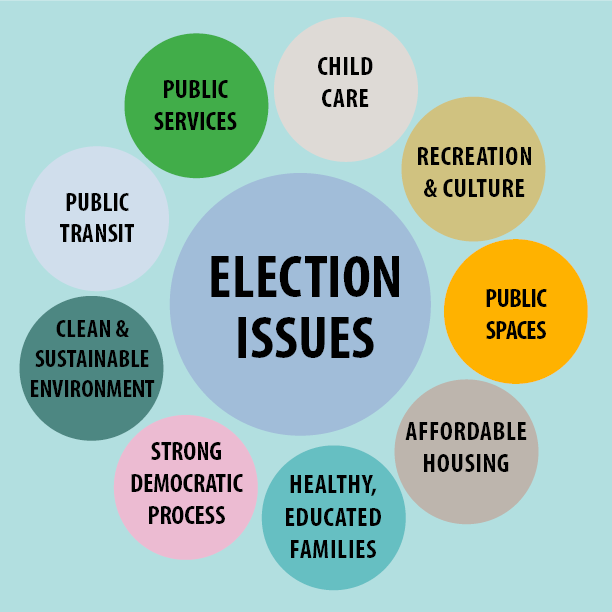 What will the future look like if we don’t take action?

After only one public hearing to discuss Epcor's proposal to acquire $3.1 billion dollars worth of publicly owned drainage assets, City council voted 7-6 on April 12 to transfer all drainage assets to Epcor. Thus, putting billions of dollars of public infrastructure under the control of a private company. While EPCOR is completely owned by the City of Edmonton, it operates as a private company and is not bound to the same standards of transparency and public accountability as a utility controlled by the City.

We urge you to remember this important decision city council made before breaking for an election in the fall.

Public Interest Alberta -- along with Progress Alberta, the Edmonton & District Labour Council and Coalition of Edmonton Civic Unions -- opposed the transfer and despite the deal being approved, there were some positive changes made to the final motion. For instance, while EPCOR is not subject to Freedom of Information Legislation (FOIP), City Council stipulated that the final agreement include a FOIP-like process which will provide a way to access information about this essential utility (including an appeal process to resolve disputes about what should and should not be accessible).

Another concern was related to the potential for EPCOR to sell the drainage asset behind closed doors, much like EPCOR's power-generation assets were spun off into Capital Power in 2009. While this concern still exists, some assurances are included to ensure that, in the event EPCOR proposes a sale, the City must hold a public hearing.

While we fell short of our ultimate goal (drainage remaining within the City of Edmonton's organization), some important details to help address the concerns around transparency and accountability were added to the final motion, thanks in part to the lobby efforts of the concerned groups listed above and the engagement of many Edmonton citizens.

A recent poll released by the Edmonton and District Labour Council shows that Edmontonians are generally opposed to the privatization of essential city infrastructure and showed a lack of community awareness and consultation around the sale.  Recent independent analysis of the sale shows that the public interest is not served by selling public City assets to EPCOR.  View the full report online.

Contact your city councillor and let them know that you want to keep Edmonton's drainage assets public.

The sale must be stopped to ensure the best interests of Edmontonians are protected. If EPCOR takes control of Edmonton’s drainage assets:

Need to find your city councillor?  Use the City of Edmonton's Ward Boundary and Neighbourhood Map.

Public Interest Alberta in the news

Public Interest Alberta Executive Director Joel French recently joined Public Interest Alberta's Democracy Task Force Chair Larry Booi and Democracy Task Force member Dr. Don Carmichael to present to the Alberta Electoral Boundaries Commission at their public hearing in Edmonton.  You can read our press release for more information on our presentation to the Commission. We encourage you to attend a hearing in your area.

What you can do

We encourage you to make your own submission until February 8, 2017. Simply visit the submissions portion of the Commission's website, and fill out the form.  Your submission doesn't have to be long or detailed; what is most important is that you participate.  We invite you to read over our submission to get a sense of what we are calling for.  In short, our two main points are that the Commission should:

1. Limit the variance in the constituency population size to 5%.

The current legislation allows variances of 25%, but that was meant to serve as an outside limit, in very different times.

Clearly, the goal should be to have constituencies of equal population size, but due to the desire to take into account some local circumstances (for example, existing community and municipal boundaries) some modest degree of latitude is necessary. The proposed five per cent variance would actually amount to ten per cent, since it would allow five per cent above and below the average.

In addition, the Commission should not make use of their power to create any of the four “special exceptions” constituencies of even wider variance as allowed under the legislation, since the particular circumstances of these areas can be better addressed through other means, such as by providing more assistance and support to MLAs.

2. Call on the Legislative Assembly to increase support to MLAs to assist them in effectively representing their constituents and addressing their varying needs.

Such additional support is not only justifiable, but long overdue. It will mean that the Legislative Assembly must revise and enhance the formula for providing support, with the goal of allowing all MLAs to more effectively represent their constituents and their unique circumstances in rural, urban, and suburban constituencies throughout the province.

The increased costs are an investment in strengthening democracy in our province and a necessary complement to the move to more political equality and representation by population.

Public Interest Alberta in the news

Opinion: Unfair riding sizes are relics from a bygone era by Larry Booi

All votes for MLA deserve an equal weight by Michael Janz, Chair of the Edmonton Public School Board

Suburban voters must get the political power they deserve by David Staples, Edmonton Journal

On Friday, December 2, 2016, Public Interest Alberta, in partnership with the Terra Centre for Teen Parents and Early Childhood Development Support Services, released the results of a province-wide survey of child care operators. The responses highlight concerns related to accessibility, affordability, and quality of early learning and child care in Alberta.

Public Interest Alberta has released 2016 data on low-wage earners in Alberta from Statistics Canada. Read our media release showing what the data means for Albertans working in the province.

Nearly one in five employed Albertans are low-wage workers.

The majority of low-wage workers in Alberta are women.

More than three-quarters of low-wage workers are 20 years of age or older.

Public Lands for the Public Interest

Edmonton City Council is in the process of selling two pieces of land currently marked as surplus school sites to private schools. Public lands should be used for public not private interests. Read the press release. On October 31, a coalition of organizations led by Public Interest Alberta and the Edmonton and District Labour Council laid out three calls to action:

What you can do:

Here's a sample template for contacting your Councillor:

I am concerned about the recent news that Edmonton City Council is planning to sell surplus school lands in Kiniski Gardens and Evansdale to private schools. It is particularly concerning because these sites were made surplus after school boards determined those communities wouldn't need any additional schools in the long term.  So, the new private schools could put our public schools at risk if they are successful at attracting more students from those communities (which they say is part of the reason they want to move to those sites).

Public lands should be used in the public interest. Please do the right thing and work to stop that process, and let's use public lands for something that builds community instead of dividing people.

Thank you for your time.

The coalition of organizations includes:

Making the Grade: An analysis of sexual orientation and gender identity policies in Alberta

Public Interest Alberta and the University of Alberta’s Dr. Kristopher Wells, Assistant Professor, Department of Educational Policy Studies have released Making the Grade, an analysis of four Sexual Orientation and Gender Identity (SOGI) policies that school boards have submitted to Alberta Education.  Read the press release here.  Read a detailed analysis of each of these four Sexual Orientation and Gender Identity policies, here.

Dr. Wells used the following criteria in his analysis of the four Sexual Orientation and Gender Identity (SOGI) policies:

1. District has a specific/standalone sexual orientation and gender identity policy, procedure and/or resources 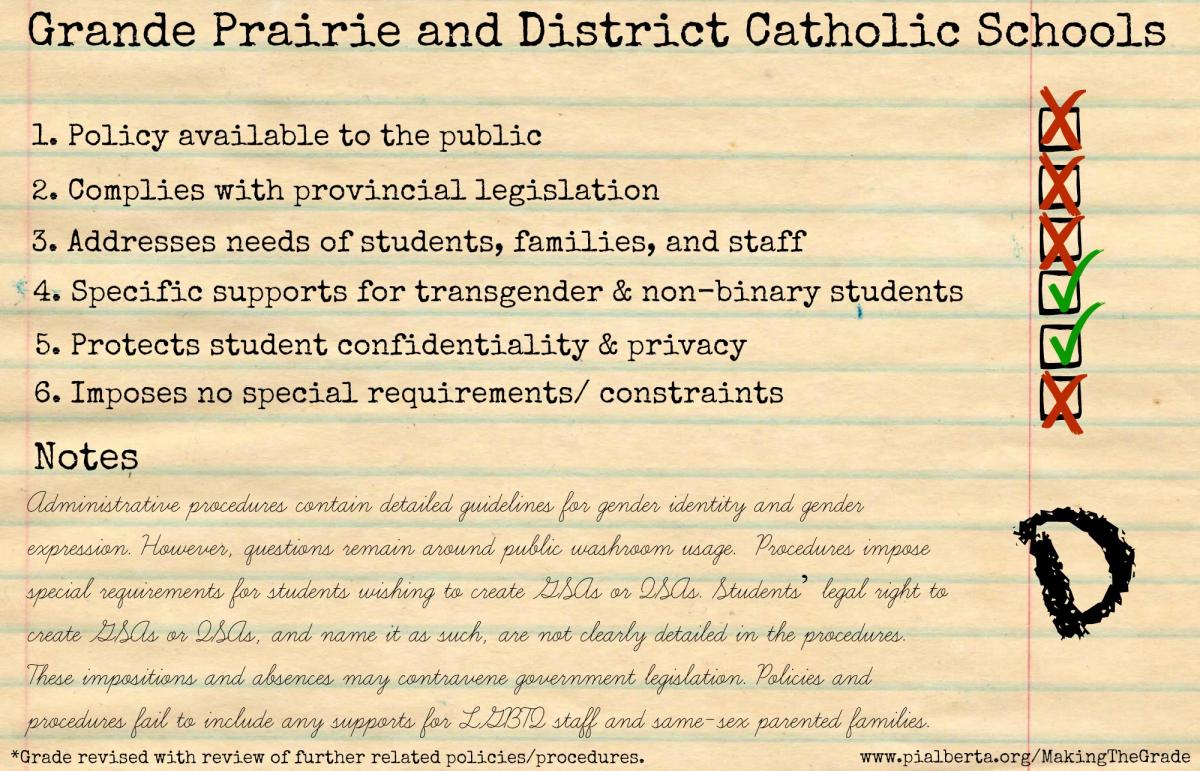 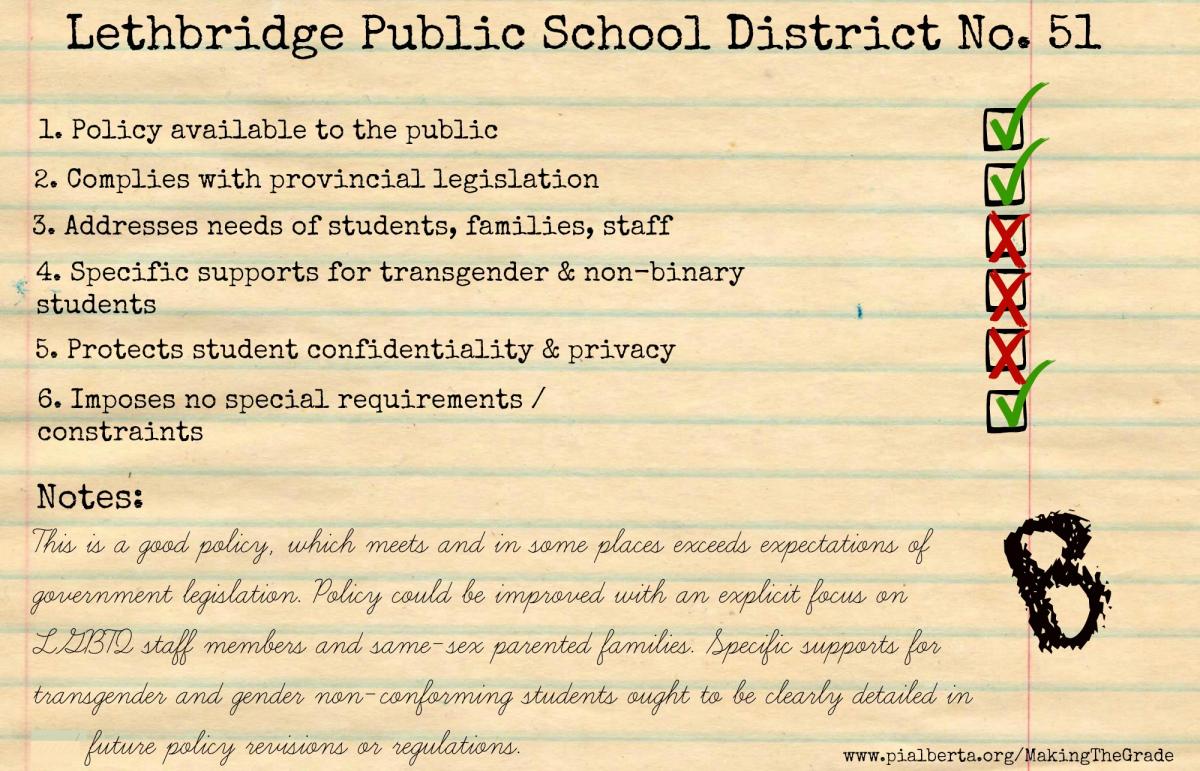 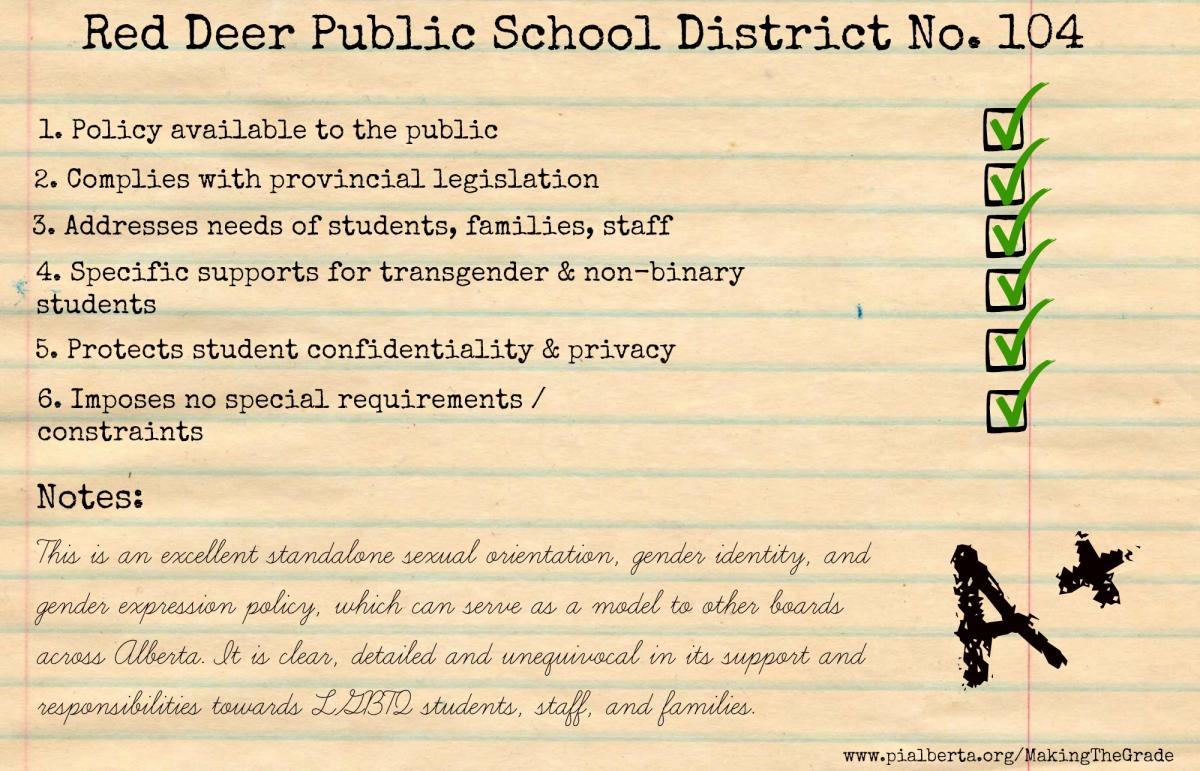 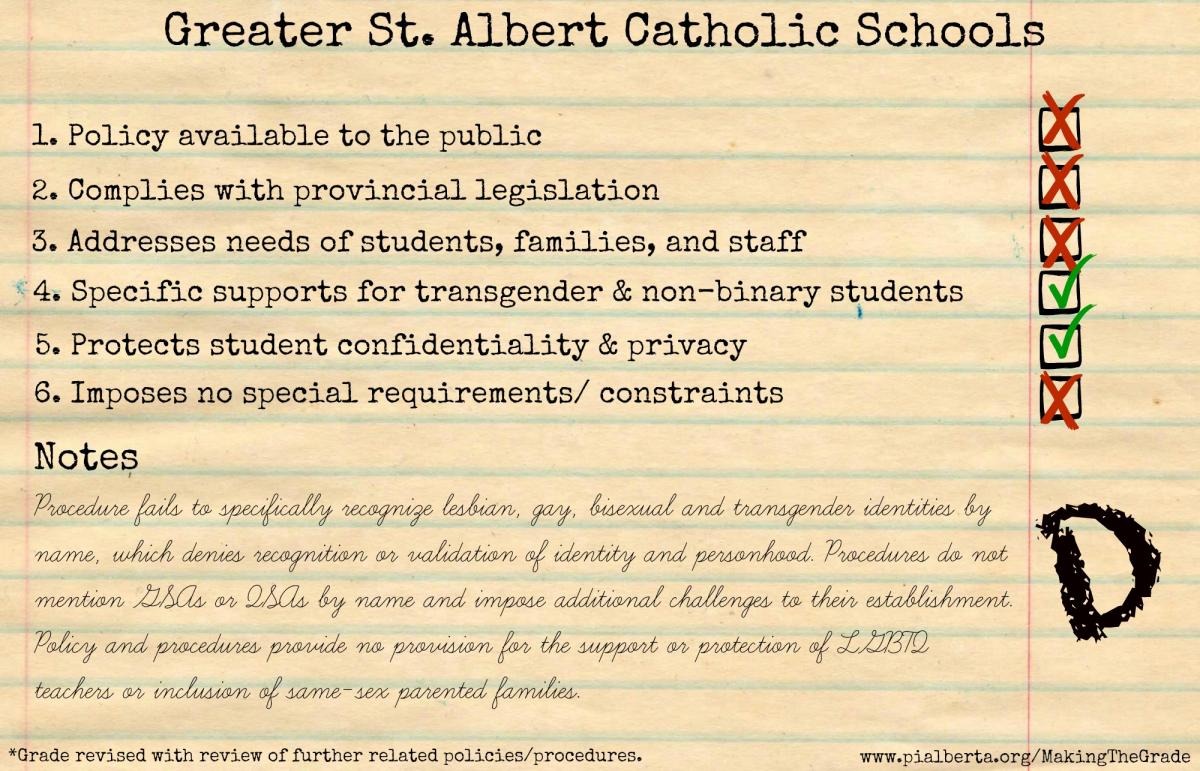 Read a detailed analysis of each of these four SOGI policies, here.