Spotlight: Lessons on Child Poverty in a Pandemic 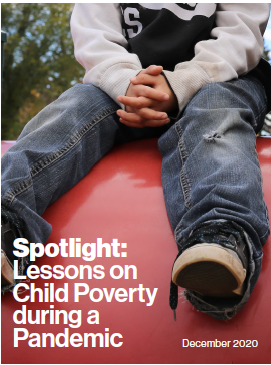 Over 160,000 or 1 in 6 children experience the all-encompassing effects of childhood poverty in Alberta – a staggering statistic which has been made even more dire by the dramatic economic fallout of the COVID-19 pandemic. This report highlights the communities most affected by systemic poverty and lack of access to support services such as Indigenous communities, immigrants and refugees, and families in rural environments. It details the effects of poverty on the development of children, including issues affecting mental health, educational attainment, employment, and housing throughout their lives up to adulthood.

Read the new report from Public Interest Alberta, the Edmonton Social Planning Council, and the Alberta College of Social Workers. 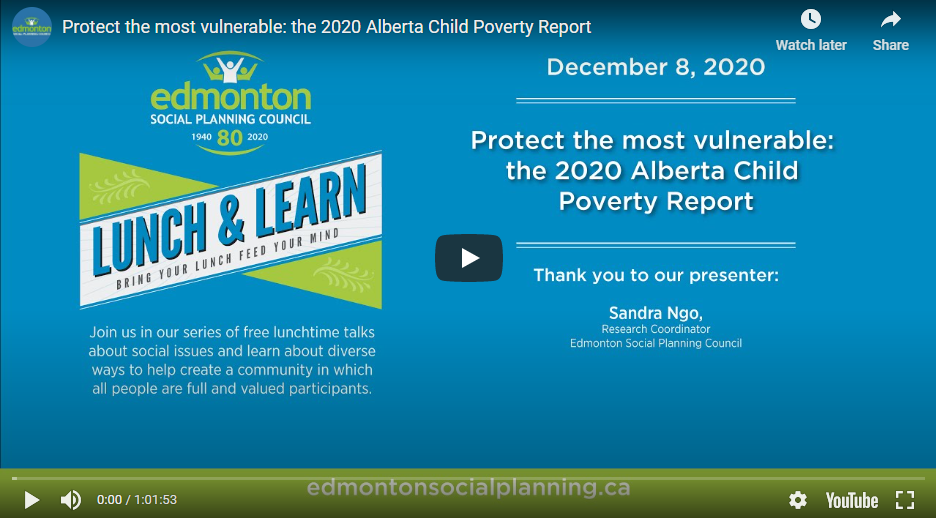 COVID-19 has led to more children in poverty: report

New report: COVID-19 has shone a spotlight on child and family poverty in Alberta

EDMONTON - The Alberta College of Social Workers, the Edmonton Social Planning Council, and Public Interest Alberta have jointly released a report on the state of child and family poverty in Alberta, Spotlight: Lessons on Child Poverty in a Pandemic.

New campaign: Even one kid living in poverty in Alberta is one too many

Public transit is an essential service and requires public investment

EDMONTON - While Don Iveson, the mayor of Edmonton, has retracted a statement that suggested that public transit might not operate in the city throughout the summer, two advocacy organizations are still ringing the alarm about the chronic underfunding and cuts to public services that have resulted in this dire situation.

EDMONTON - The Alberta College of Social Workers, Edmonton Social Planning Council, and Public Interest Alberta have jointly released a report on the state of child and family poverty in Alberta called “Invest in Families: Ending Child Poverty is Good for All”.

The Government of Alberta has introduced a discriminatory minimum wage for youth.

The effects of the $15 minimum wage were immediately apparent. It was a positive step forward for building a strong economy for all Albertans, and contributed to the child poverty rate decreasing by half over the last two years.

But now, the provincial government is discriminating against youth--a demographic of workers who can't express their opinion at the ballot box--by cutting their minimum wage from $15 to $13 per hour.

This policy divides working people by providing an incentive for businesses to avoid hiring adult low wage workers, who tend to be already-struggling young adults, women, and people of colour.

Join us to demand equal pay for equal work. Sign the petition today.

I call on the Government of Alberta to eliminate the differential minimum wage for youth, ensuring Alberta's workers are treated equally regardless of age.

One in Six is Too Many: An Alberta Child Poverty Report

On November 20, 2018, to coincide with National Child Day, Public Interest Alberta, the Edmonton Social Planning Council, and the Alberta College of Social Workers published a new child poverty report, One in Six is Too Many: An Alberta Child Poverty Report.

The Edmonton Social Planning Council, Public Interest Alberta, and the Alberta College of Social Workers have jointly released a new report on the challenges faced by Albertan children and youth titled “One in Six is Too Many: An Alberta Child Poverty Report”.

EDMONTON – The Government of Alberta has introduced An Act to Combat Poverty and Fight for Albertans with Disabilities, which if passed will increase and index income support rates for its Income Support and Assured Income for the Severely Handicapped (AISH) programs. These are changes Public Interest Alberta has been advocating for years.