Public Interest Alberta is now accepting nominations for our Annual Public Interest Awards.  These awards were created to give public recognition to those making important contributions in promoting the public interest in Alberta.

The award is given to two individuals and/or organizations each year making an exemplary contribution in one or more of the following ways: 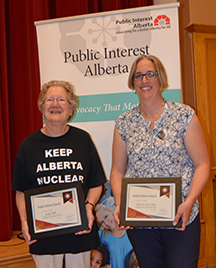 From left: Cecily Mills and Carolyn Blasetti accepting on behalf of SOS

No awards were presented in 2015