"Do No Harm"—An Albertan's experience with a mother in care 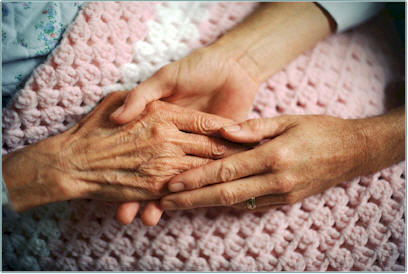 We have received a very powerful story from an Albertan whose experience having a mother in the continuing care and hospital system shines a light on the need for major changes to be made. She is an 85-year-old woman with dementia who has been moved several times between facilities in Calgary. The story makes it clear that the Alberta Government needs to act now to open new, publicly-operated long-term care beds and remove the profit motive from continuing care. Read this story and please share it widely.

While physicians may no longer take the Hippocratic oath, this basic approach to health care outlined by Hippocrates, the ancient Greek founding father of Western medicine, still forms the basis of our health-care system.At least, that’s what we believe until personal experience shows us otherwise.Here in Alberta, I have recently been finding out how our Long-Term Care (LTC) system is violating this core principle and is hurting patients.While the current state of the system is bleak, the good news is that Alberta’s NDP government has promised to take action. However, we need to ensure that the action they take is the right one.This is a once-in-a-generation opportunity to do the right thing, to not only build the LTC beds Albertans have desperately needed for years, but to build them the right way, to create facilities – homes – where seniors and others with long-term health-care needs can live in dignity and safety for as long as possible.

That’s a long way from where we are now – and will only happen if Albertans let the government know what needs to be done. First, let me tell you my story.My mother, who is now 85, was diagnosed with dementia in 2007. In the last 3.5 years she has been moved three times among various Supportive Living units, thanks to Alberta Health Services’ (AHS) rules and its ability, or inability, to provide care for changing needs in a single location.I’ve been told by an AHS official that it has an “aging-in-place” approach to care and in allowing seniors to stay in their home for as long as possible.Better home care and community care is a noble aim and an election pledge this government needs to put in place. However, I have seen no evidence of this.

Anyone who has a loved one suffering from dementia knows that moves are bad. Dementia patients need consistency and familiarity. Changes, especially big ones like moving home, increase confusion, anxiety and agitation. They lead to declines. Yet, Mom has been forced to move three times.On New Year’s Eve, she fell and fractured her pelvis – an all-too common problem for seniors. The private, for-profit operator of her Supportive Living home carried out an assessment of her condition in the hospital and unilaterally decided it would not allow her to return.

I was advised that Mom would be heading into an LTC facility so I began to research the options. This was the beginning of a heart-breaking journey.AHS provided a list of 29 facilities. Sounds like a lot of choice, doesn’t it?Unfortunately, eight of those were outside of Calgary, where our family lives, and three so far south in the city as to be inappropriate because it would make it very difficult for family members to continue their regular visits, which are an essential part of Mom’s care. We were told by AHS that one facility on the list was for Asian residents, so not for Mom either.Still, that leaves 20 facilities, which again doesn’t look bad on paper. I started to arrange visits. I saw 11 that I figured offered the best geographic locations – and the bad news began. It became clear very quickly that Mom was facing two more moves in the next year or two, which will mean she’ll have moved five times in five years.More moves. More decline and more risk. In the U.S, there is a recognized nursing diagnosis known as Relocation Stress Syndrome. The elevated risk of mortality involved in transferring frail elderly patients has led to legislation to protect nursing home residents.

So, why are we facing two more moves for my frail Mom?Because three of the facilities provided as options by AHS don’t accept patients directly from hospital. The reason is that these facilities have long waiting lists because, of course, they tend to be comfortable, well-run, home-like facilities that appeal to residents and their families. If you want to go there, you’ll be sent somewhere else first and go on a waiting list that can be two years long.Ouch! Because we want to make the next move Mom’s last, it rules out those three.

What of the others facilities? I found only two where I’d be happy to see Mom live, where she’d have a room of her own, with a place for a little furniture of her own to make it feel like home, and her own bathroom and shower.But then comes more bad news. Each of these had long waiting lists. Some facilities won’t say how long the lists are, some will. One of these said 14-18 months, the other just said long. So once again, if you want to go there, it’ll mean a move somewhere else, then a wait, then another move.Every one the other facilities where Mom might be offered a bed will mean her having to share a room with one other resident. Most had toilets shared between two rooms and four residents. Many had one shower or bath for each floor, so shared by 10 or 20 residents.

Whether in old or new facilities, many of the shared rooms I saw were cramped, with little or no room to personalize. Some had clearly been designed as private rooms, but had been converted to shared rooms simply by throwing up a curtain and adding a bed. If one resident wants to watch TV while the other sleeps, I guess the tired resident is out of luck.I was told that some residents get to like sharing rooms. Perhaps, but I have yet to meet anyone who has expressed a desire to spend their final years living with a stranger.Patients should at least have the option of their own rooms, of a little bit of privacy. Sharing of rooms is not a medical necessity. It’s the result of a choice previous Alberta governments have made to cut costs to pay for tax cuts for corporations and high-income earners. Our seniors, who have paid their fair share for their entire working lives, deserve better.Unfortunately, it appears that about half of LTC beds in Alberta are in shared rooms (compared to 75 per cent in B.C.), and because private rooms are what people want, those have painfully long waiting lists.The question I posed to AHS transition services is: How is this not abuse?

When you embark on a course of action that you know will aggravate a patient’s condition, it seems abusive. It’s indisputable that change is bad for dementia patients. It’s also indisputable that sharing a room with a stranger is change, that moving to a new home is change. Yet, Mom is facing the fourth and fifth moves in five years and the prospect of sharing a room for a year or two.I also put this question to AHS transition services: Would you send a patient with mobility issues to live in a two-story townhouse where he or she had to walk up and down stairs? No - because that wouldn’t be appropriate and would aggravate the patient’s condition.We will, however, put a dementia patient on a course of almost constant change knowing that it will make things worse. Is this because dementia is considered a mental-health condition and isn’t taken seriously? It sure seems like it’s being treated like a second-class disease to me.So, now we wait to hear to which cramped and institutional facility Mom will be sent. Then we’ll wait to see if she lives long enough to make it to the top of the waiting list for a spot in a nicer, homey facility.

That’s what makes this process so heart-breaking for the people who are trying to do their best for their loved ones. There are some wonderful facilities, designed to meet the needs of both dementia and non-dementia patients. We know how to do this, but previous governments have chosen not to do it.We also have a health system staffed by wonderful, hard working people who care deeply for their patients. No matter the facility, I was almost always impressed by the approach of front-line caregivers in the facilities and by the staff in AHS transition services. They didn’t create this mess, but are forced to work within it. They are doing the very best they can.

Now, it’s time for the Alberta government to do the best it can. During the election campaign in 2015, the NDP pledged to build 2,000 new public LTC beds. Similar promises to create LTC were made by previous Conservative governments, but those promises were broken. We need to tell our MLAs that we want the government to keep its promise this time and to follow through on creating these new beds. We need to tell them that we want strict standards on patient-staff ratio to be created and enforced, so that there are enough caregivers on hand to meet the needs of patients. We need standards of care to be established and enforced.

We need help for families navigating a complex system and we need a Seniors’ Advocate with real power.The best way to get the facilities and standards we need is to have them publicly funded and publicly operated. Currently, only about a quarter of all LTC beds are in facilities directly operated by AHS. The rest are operated by non-profit groups or for-profit corporations.Let’s remove the profit motive from the care of seniors and others in LTC so that every dollar goes to care instead of to profit and so that we maintain direct control over standards.With the size of our seniors population booming, we need to get this right – and we need to act right now. The number of LTC beds in Alberta has fallen by 46 since 2010, from 14,569 to 14,523 as of March 31, 2015. We need to pressure the government to build good facilities where our loved ones – and ourselves in a few years – will be able to have some dignity.

It’s not too much to ask. It’s not only the right thing to do for patients, it will save money in the long run (one recent estimate puts the savings at $147 million per year) by freeing up more expensive hospital beds, and the construction of LTC facilities will create much-needed jobs.  Find out how to lobby your MLA.

NOTE: Wondering why this is anonymous? Fear. Because the facilities to which my Mom may be sent have the right to refuse to accept her, I’m afraid that speaking out publicly may hamper our search for a new home.

If people see that the family is prepared to criticize current standards and operations, some operators may be less willing to accept her. If we can’t find a place within the system, we may be faced with having to find privately funded care. I’ve been told by one private operator that the costs could be well over $6,000 per month, instead of the government rate of about $1,900 per month. We simply cannot afford that.

Read or print this page in PDF.