Engaging Citizens for a Stronger Democracy

The involvement of citizens in the political process is an essential part of democracy. 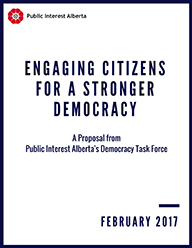 In strong democracies, citizens’ active participation is encouraged and facilitated by elected representatives who respect and value the informed views of citizens and organizations. Citizen engagement in governance and decision-making is more than a democratic right - it is an important element of sound policymaking and a key element of strong democracy.

We encourage you to take this proposal to your elected officials to encourage the government to systematically adopt better practices for involving citizens and civil society groups in a meaningful way when developing legislation and public policy.