Many of the 24,000 government-owned and supported seniors units in Alberta were built between 1960 and 1990, before sprinklers became mandatory under fire and building safety codes.

On Wednesday, Prentice said the Alberta Social Housing Corporation would commit $70 million to bring those buildings up to code.

“Albertans deserve senior citizen housing that they know is safe, that they can rely on,” Prentice said.

“Ensuring that senior citizens in this province are not only secure and comfortable, but that they are safe in the lodges and the facilities that they are living in is going to be a priority for this province, as long as I am the premier of Alberta.”

Speaking to a crowd at Edmonton's Kiwanis Place Lodge on Wednesday, Prentice said the province faces “no small task” in upgrading all the buildings necessary, noting changes won’t happen overnight.

“To address this, we will bring immediate fire safety upgrades to the facilities that need it most,” Prentice said.

Over the next month, the managers of publicly owned facilities are being asked to compile and submit a property assessment to the province.

Funds will then be allocated based on priority, once the assessments have all been considered.

From there, Prentice said the province will develop a longer-term approach to bring all facilities up to code.

“This is a first step,” said Jeff Johnson, who was appointed Minister of Seniors in September.

“I can’t say why not all of those are up to snuff. But it costs money and it takes determination, and it takes political will and it takes resources, and I have to say until now it hasn’t been identified as as big a priority as it should have been.” 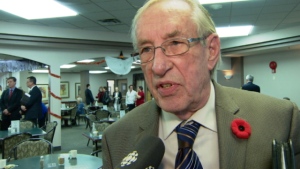 Noel Somerville, the Chair of Public Interest Alberta's Seniors' Task Force, said the province can still do more to protect its seniors. (CBC)Douglas Mills with the Alberta Senior Citizens Housing Association said he was pleased with the announcement, but others were less impressed.

While he was happy to hear about upgrades to the sprinklers and fire systems in seniors’ facilities, Noel Somerville, the Chair of Public Interest Alberta's Seniors' Task Force, said more can still be done.

“There is a third very crucial safety problem, which is enough staff to evacuate residents who cannot evacuate themselves – particularly at night time.”

“It seems to me that $70 million is kind of a paltry amount when you consider the scale of the problem,” he said.