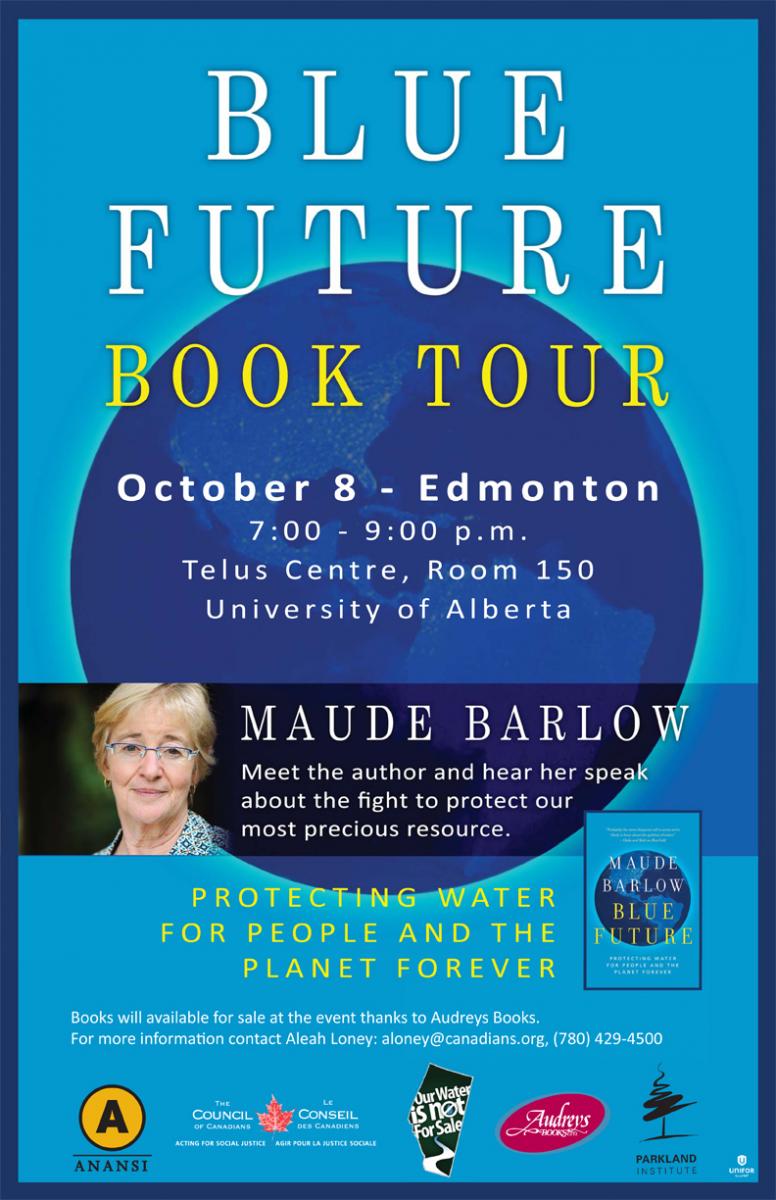 Join the Council of Canadians for an evening with Maude Barlow at the Edmonton book launch of her new book,Blue Future: Protecting Water for People and the Planet Forever.
When: October 8th, 7-9pm
Where: Telus Centre, Room 150, University of Alberta, Edmonton
Blue Future is a powerful, penetrating, and timely look at the global water crisis — and what we can do to prevent it. The final installment in Barlow’s Blue trilogy,Blue Future includes inspiring stories of struggle and resistance from marginalized communities, as well as examples of government policies that work for people and the planet. A call to action to create a water-secure world, it is, in the end, a book of hope.
Copies of Blue Future will be available for purchase, and Maude will be signing books after her presentation. Click here for more information on Blue Future.
This event is co-sponsored by Council of Canadians U of A Chapter, Council of Canadians Edmonton Chapter, Parkland Institute and the Our Water Is Not For Sale Network.

2. Support a level playing field for solar in Alberta and bring back the 15 cents/kWh credit for solar micro-generators

Proposed Changes to the Micro-Generation Regulation (as presented by Alberta Energy at the Micro-Generation Regulation Workshop; Calgary; June 13th, 2013) will force retailers to carry the financial burden of fairly compensating micro-generators. In addition, the Alberta Electric System Operator (AESO) is pressuring retailers to credit solar generators at retail rates less than fair market value. For these reasons, electrical retailers in Alberta have been forced to end the Light up Alberta program and begin compensating solar generators at rates significantly lower than coal and gas power plants are receiving.
Learn more and sign the petition!

Right now there are 4 on-going, uncontrollable tar sands spills that have been spilling into the environment near Cold Lake, Alberta for months and CNRL (Canadian National Resources Ltd.) and the Alberta and Canadian government are unable to stop them. The uncappable spills are just going to keep spilling.
The spill counter shows how much has been spilled and continues to spill into the environment and traditional territory of the Beaver Lake Cree and Cold Lake First Nations.
Learn more about the tar sands and what you can do to stop them attarsandssolutions.org. 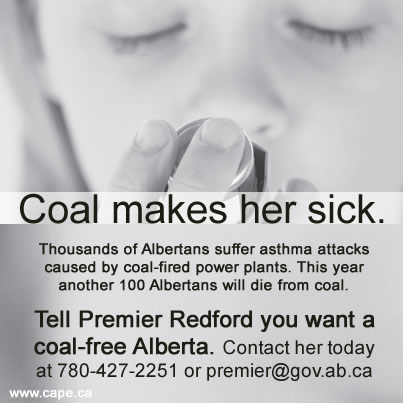 Coal makes her sick.
Now the bad news…
Thousands of Albertans suffer asthma attacks caused by coal-fired power plants. This year another 100 Albertans will die from coal.
Doctors and other health experts support energy conservation, wind and solar power to help Alberta phase-out coal.
Alberta burns more coal than all other provinces put together. In 2012, according to the publication, A Costly Diagnosis, coal provided 64 percent of the province’s power needs. But it doesn’t have to be this way. There are green, clean and just alternatives just waiting to get on the grid for a transition to healthier people and planet!
Tell Premier Redford you want a coal-free Alberta. Contact her today at 780-427-2251 or [email protected] For more information visit www.cape.ca.
These ads ran and were sponsored by Canadian Association of Physicians for the Environment (CAPE), Asthma Society of Canada, The Lung Association of Alberta & NWT.

This fall, 1000+ youth leaders will converge in Victoria, BC from October 4-7th to fight for our future.
Together we’ll build the movement to fight fracking, stop the carbon corridor, divest from fossil fuels, build a clean energy future, and stop the climate crisis.
Visit the Power Shift website to read more and register…
To keep updated on PIA in the news and on the news, as well on environment issues in Alberta, subscribe to our e-news.