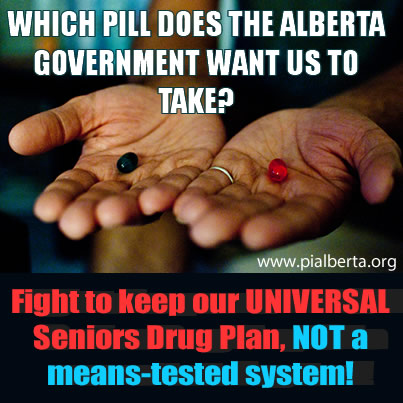 EDMONTON—A number of seniors’ organizations from Public Interest Alberta’s Seniors Task Force are demanding to know why the Alberta Government is planning to eliminate the seniors drug program in favour of a means-tested system while both the Health Minister and Premier have previously committed to not eliminate the plan.

Since last September the organizations have repeatedly requested to meet the HealthMinister in order to understand how the government expects to save $180 million as announced in last March’s provincial budget.

“That savings to government is in fact a transfer of costs, not to seniors in general, but to those who have a high need for prescription medication – the sick, frail and chronically ill,” says Noel Somerville, the Chairperson of Public Interest Alberta’s Seniors Task Force. “If instituted, this plan will become a form of surtax on people simply because they are sick, and we don’t know anyone who thinks that is acceptable public policy, particularly in the only province that imposes a flat 10% income tax on all its citizens regardless of income.”

The seniors organizations are demanding a meeting with Premier Redford and the Minister of Health, and say they will not leave Minister Horne’s constituency office until they have a meeting date confirmed.

The seniors want to know why the Premier and the Minister are going to break the promises they made in writing in two separate letters not to eliminate the seniors drug plan.

The first, signed by Alison Redford, was written one month before she won the leadership of the PC party. In it, she repudiates Ron Liepert’s Pharmaceutical Strategy and undertakes to retain the current universal Seniors Drug Plan. She further notes “that income-based supports are poor repayment for the efforts of Alberta seniors”.

The second letter, signed by Health Minister Fred Horne, was written one month before the last provincial election. It indicates that “the government has no intention to change the current Seniors Drug Plan and, in fact, plans to enhance it”.

Less than a year later, the 2013/2014 Alberta Budget announced that the current universal Seniors Drug Plan would be eliminated and replaced with an income-based plan. Absolutely no details of the new plan have been announced, though we have been told that its projected start date of January 1, 2014 has been delayed.

The Seniors Task Force of Public Interest Alberta believes in constructive solutions and developed a Pharmacare Position Paper that was sent to Minister Horne with the request to meet with him on September 27, 2013. Following numerous phone calls to his office, we have not received any response to that request.

“We are angry and frustrated and want to remind Premier Redford of her own words: ‘Income-based supports are poor repayment for those who devoted their lives to building this province’,” says Noel Somerville. “Seniors deserve an honest and fair response and it is unfortunate that we need to go to such lengths to get a meeting.”-30-

The Seniors Groups will be holding a media conference outside Minister Fred Horne’s constituency office (308 Saddleback Rd) at 10:30 AM, January 16.