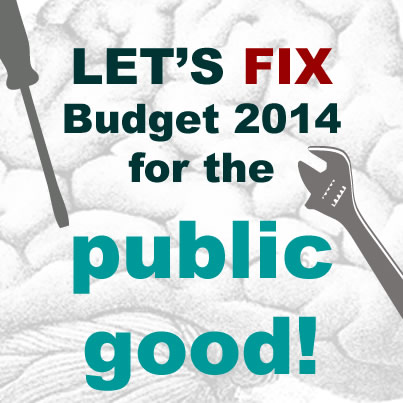 On October 1st, the provincial government announced a public consultation on the Budget 2014 with open house sessions to be held from Oct. 9-18, and their online survey is open until Oct. 31.
We encourage our supporters and members to use this opportunity to speak out against the budget cuts that are affecting our vital core public services and urge the need for revenue reform to help address our budget woes.
Here are some of the issues we think the government needs to address for their 2014 Budget to help enhance our public services and challenge privatization:

In Alberta, low and middle income earners pay more in income tax while the very wealthy benefit. We need to establish a fair tax system, moving from being the only province using a flat tax to joining the rest of the country and use a progressive tax system. (See the comparisons between Alberta, BC, and Ontario here…)
“It is vital that Albertans challenge the Redford government to establish a fair tax system that will allow us to save for our future needs and to move off a reliance on non-renewable resource revenues for core public services,” says PIA Executive Director Bill Moore-Kilgannon. Read the Parkland Institute report, Stabilizing Alberta’s revenues: A common sense approach, to learn more.

Oil companies are making fortunes, while our public services are being cut, our ecological systems and climate are taking a battering, and First Nations communities are being poisoned. Everyone is taking a hit.
Our "rock-bottom royalties" rates need to match the international average to start sharing revenue to the public.
Instead of subsidizing tar sands development, the Alberta government should be supporting more clean, green, and just energy alternatives like wind and solar projects, many which are just waiting in line to get on the grid. Not only are renewable energy sector projects cleaner, they generate 10 times more jobs than dollar invested in the fossil fuels sector!
Read the Parkland Institute's report, Misplaced Generosity: Update 2012: Extraordinary profits in Alberta's oil and gas industry, and Green Jobs: It's time to build Alberta's future to learn more.

3) Do away with Results-based Budgeting and utilize cooperative methods for effective and efficient public services management.

The Alberta government is using a process called Results-based Budgeting. The Parkland Institute, from findings of their recent report, Smoke Screen: Results-based Budgeting, Privatization, and Public Sector Cuts in Alberta, has expressed concern "over the dubious track record of performance management efforts like RBB…exacerbated by the Alberta Government’s refusal to make public important documents related to their RBB process."
The report's author, Shannon Stunden Bower, says, “that this isn’t about efficiency and effectiveness at all, but rather a mechanism meant only to justify continued privatization and de-funding of public services in Alberta.”

4) Enhance public services instead of privatizing them.

The Alberta government is looking at alternative models to fund infrastructure projects, including the increased use of Public Private Partnerships (P3s). If by following national trends and pressure from the Federal government, the push to use P3s and other privatized models is very likely, not at just the municipal level (see the fight against the use of the P3 arrangement for Edmonton's LRT), but at the provincial level (such as implementing chartered schools in Alberta). But, P3s cost us more. Check out this downloadable guide in which economist John Loxley takes a critical look at the case for and against using public-private partnerships (P3s) for municipal infrastructure; arguments that can be extended to the provincial scale as well.
His analysis goes beyond the claims made by P3 promoters to examine the costs and consequences of privatizing vital community assets. Through a series of questions, Dr. Loxley outlines the problems that accompany infrastructure and service privatization, and highlights the value of keeping vital assets and services public. The Redford government needs to stick to their promises like eliminating child poverty and improve seniors care! Until we fix the flat tax system and stop giving away royalty revenues, we will not be able to address the need for funding our core public services.
Given these consultations are at short notice and the survey itself limiting, we encourage our members and supporters to also write letters to the premier and their MLAs, write op-eds to local papers, and hold community talks to get your concerns on the need to stop the cuts, restore and increase public service funding, and reform our revenue streams that serves the public interest! Check out Better Way Alberta for more about tax and royalty reform for strong public services.